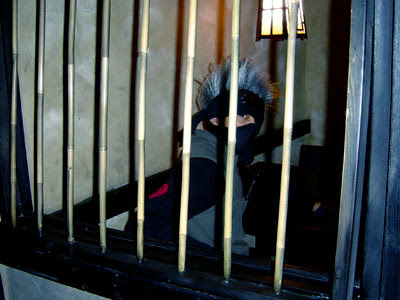 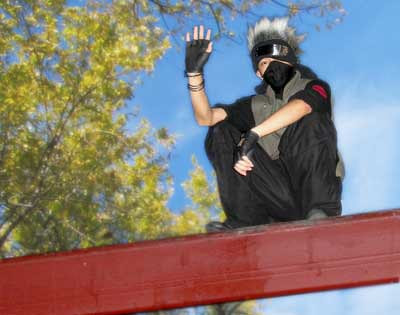 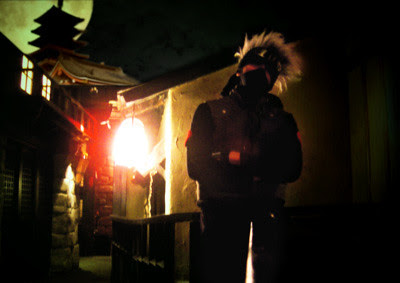 Earlier this evening, I waited for Ikura to come back with the news, he reports that all nine rookies have passed. I felt just a wee bit giddy seeing how Ikura had to eat his words about his earlier statement. Heh heh! Now its just all up to the the three to decide for themselves.
Well I'll know five days from now, in the meantime I am going to read the last chapter of Icha Icha Violence Volume 2. I wonder what's going to happen to Junko! hehehehe...
Jya' ne!
Posted by Kakashi at 7:35 AM 7 comments:

Just a quick thank you to everyone who has come by and visited the site! I never imagined it becoming this popular in such a short amount of time! I really, really appreciate it! Being a ninja is not an easy job, nor glamourous. Please keep visiting and leave comments! Any questions or suggestions on how to make this site better or more informative please e-mail myself or Konoha_cop! Also please, please, visit some of out sponsors on the site! Ninja's don't get paid very well around here and well, I would love to be able to pick up the new Icha Icha Violence book when it comes out! And as a thank you I used my Sharingan to copy this "Oiroke no Jutsu" (Sexy no Jutsu) from Naruto-Kun mu ha ha ha ha~ Enjoy, jya ne.
Thanks again! 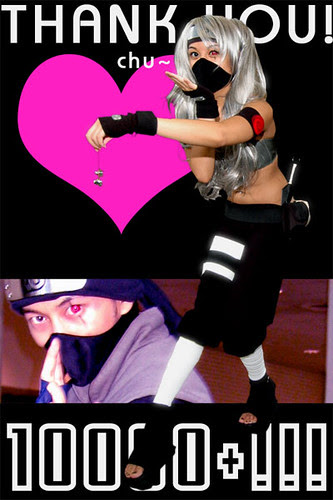 It's been about a week since we have all gotten back from Wave Country. Most of the bruises and bumps we have gotten from that mission are healing nicely. Except for mine, (Zabuza's sword took a nice chunk out of me. I was told to take it easy for a bit. ) Also their has been one other issue. Naruto and Sasuke's sense of teamwork. It's been uneasy between them since the trip back. They are constantly fighting. (More accurately Naruto is constantly fighting...) He's is on an insane aggressive drive to prove himself. And Sasuke has been surlier then ever. In a way its good that they have formed some sort of competition with each other to see who's better. But on the same note this could also be troublesome. 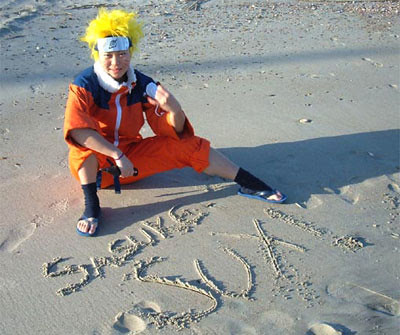 Not to mention that since the team is back on some nice calm D-ranked missions. Naruto has been getting frustrated again.
D-Rank missions may not be the most exiting, but they are still important and needed to be done. You know, simple stuff, cleaning up litter, helping the neighbor's with their gardening, walking dogs, and so forth. Also, sigh...I just want to finish healing and get through the latest volume of Icha-Icha Paradise... It doesn't help that Naruto get overexcited and keeps overdoing things which just leads him into trouble. 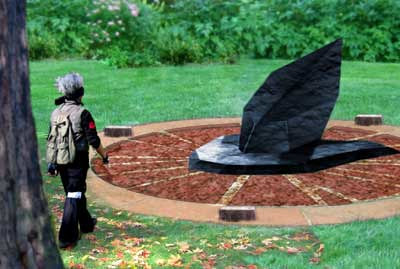 After I got a bit lost this morning, I met up with my team. And just like the last few days had to try and keep Naruto from well, being Naruto. He just about fell over a waterfall today, Sasuke saved him, much to Naruto's dismay.
By the afternoon I was glad to dismiss them and head over to the Academy's office to file some paperwork and talk to Ikura
I hate meetings... Usually they talk to long and there is a lot of waiting around, but this time around it was quick cept for a bit of news. Apparently in one weeks time the Chunin Exams (mid-level ninja exams) will take place.
Hmm.. this should prove to be interesting...
well that's all for now!
ja' ne!
Posted by Kakashi at 2:51 PM 5 comments:

Hey there! Sorry to keep everyone waiting! It has been well, an interesting day!
I am very proud of my team. 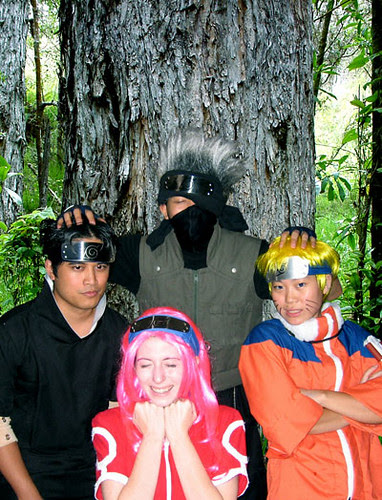 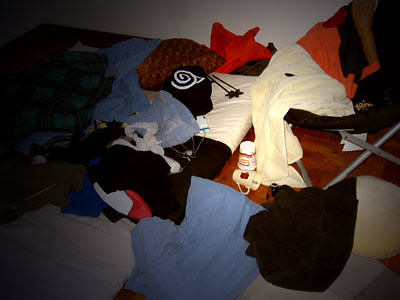 Sigh..Poor Tsunami, she should not have had to clean up after them. Then I would have the no more problems. Sigh... Oh well!
That's all for now. See you all back in Konoha!
Ja' Ne!

P.S. Oh and here's a pic Naruto INSISTED on me posting, I can't believe everyone agreed to do this, a chakra power pic of Naruto infront of the bridge. He used so much chakra that the bridge got faded out... hehe what a cocky kid... Oh well it's been a while gotta go to Konoha Books, to see if the new book came out or not~ Te he he~ 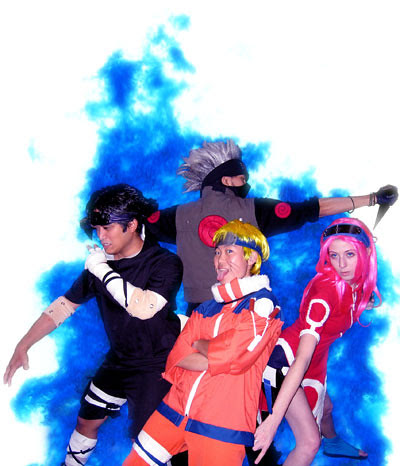 Konoha_cop here. Ok, so instead of going on vacation orders came down for me to get to Wave Country myself and find out what's going on. Strictly information gathering and no interference. (Thank god cause I am in no condition to fight. I am a desk nin for a reason!) I position myself on high ground a fair deal away from the bridge but still in close enough range to see with the help a my nifty tele-photo lens. And with the help of a great hiding jutsu that I learned from the 3rd Hokage himself. I am completely undetectable and I was able to get some more information on the situation on the bridge firsthand.

So as mentioned before there was this crazy mist surrounding the bridge which made it hard to see, even with my equipment. I can only make out shapes and colors in some spots. The mist also has seemed to get thicker from the photos that were shown to me earlier. Also I saw the strange dome like ice structure up-close, amazing I have to say. But then I realized this could be real bad. I know that Kakashi-san and the other members of Team 7 are not the types that can perform many water and ice type jutsus. So this means that this was being used against them. This left me feeing a bit uneasy. For a short while the mist did lighten up a bit and I did manage to see the bridge builder with Sakura right next to him with Kakashi just a few steps away. He looked like he was searching for something and from what i can tell looks like he took a hit from something, because he seemed to be bleeding but not too bad. Further up the way was that ice dome which upon further inspection looks like they were being used like mirrors. Inside I can see both Sasuke and Naruto. They seem to be attacking the mirrors but for some reason they keep getting knocked down.

The mist rises again and I cant see anything. I hear Sakura scream, an a minute later I hear Kakashi yelling something about Sasuke being form the Uchiha Clan or something. Then the strangest thing happened, their was a great red glow from the area of the ice mirrors. 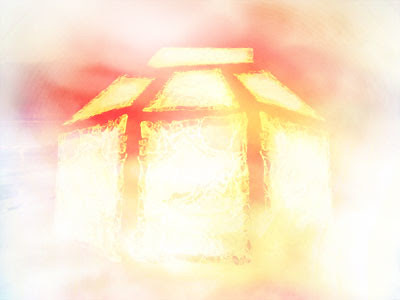 And this terrible, scary chill ran down my entire body. The heat of an intensely powerful chakra. One that I had felt only one time before. The Nine Tails! OMG!! I thought for a minute, was the seal breaking?
was I going to have face the thing that injured me so bad. That made me stuck as a desk nin for the rest of my life? I waited a moment looking and listening for any reactions. I can sense that the seal was leaking but had not completely been broken. I stopped shaking, then I heard Kakashi in the mist somewhere once again yelling at Zabuza to end the fight in one final blow. Right after that I heard a giant crashing sound of glass/ice breaking. It got quiet again. Then I heard barking and growling. 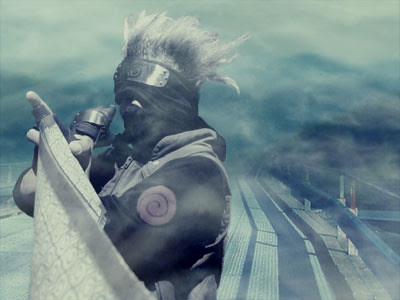 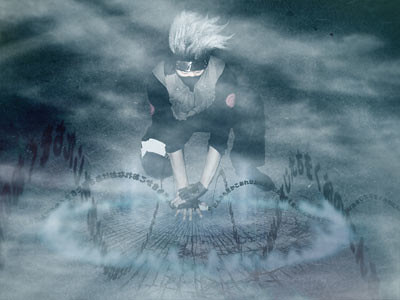 This could only be one thing. Kakashi summoned his nin-dogs. I have seen him do that before! So things seemed to be under control. The mist was starting to lift a bit as well. And then low and behold I got to see a very special sight. A rarely seen justu! The lighting blade, better known as "The Chidori"! A Kakashi original!!! I even managed a decent photo! 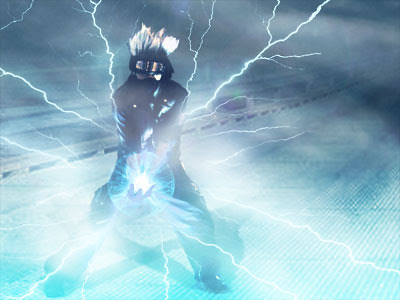 Now, here is as it stands, Kakashi and Zabuza (being held down by Kakashi's dogs) in one area. Sakura and Tazuna off to one side, and far off away from me, the ice dome is gone. I see Sasuke lying on the ground and Naruto facing the young boy Zabuza was with, a missing nin named Haku. Naruto seems to be going in to finish off the boy. At about the same time Kakashi is about to finish off Zabuza. But to my surprise the next thing I see? The boy gets in Kakashi's way, and took the blow from the Chidori meant for Zabuza. It felt like a huge shock-wave and the result was devastating (For the boy).

Zabauza used the opportunity to continue his attack on Kakashi. He didn't have much luck. At the same time Sakura makes a bee line for Sasuke, now lying on the ground. Naruto, just staring at the Kakashi battle and doesn't seem to look back towards Sakura who starts crying over Sasuke's body.
In the meantime Kakashi quickly immobilizes Zabuza's ability to yield that huge sword of his. Stabbing him with a pair of kunais in vitals points on both his arms. At this point I deem the situation over and I was going to come down and see if there was any thing I can do to help. Just then I got intercepted by a huge crowd heading towards the bridge.
Well this is where i have to end this for now.
Konoha_cop
Over and out!
Posted by Konoha_Cop at 10:39 AM 7 comments:

Finally got here at the village, will head into the mist and try to get some real reports back to you. I'll see what images I can send back in a few days.
Posted by Konoha_Cop at 6:34 PM 4 comments: