Kakashi-san and Saskue are back!
Looks like the two got back just in the nick of time, and what an entrance it is. WOW! Now it's time for the fight everyone has been waiting for! The whole arena is on fire! I've never heard anything this loud since way back when...(I forget). 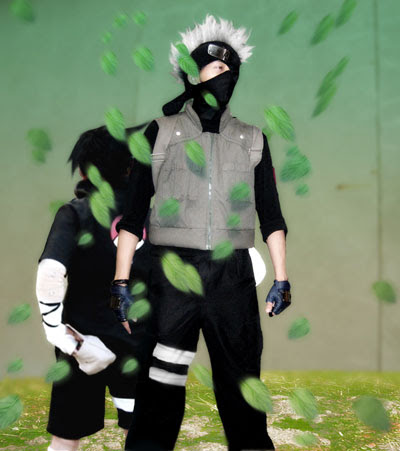 Gaara versus Uchiha Saskue! Is about to start! Though if I had to fight Gaara I think I would forfeit...that kid scares me alot.
Just a moment ago Naruto and Shikamaru ran over and told me to check out the hallway on the middle teir. What I found was gruesome (please beware this is very graphic...) 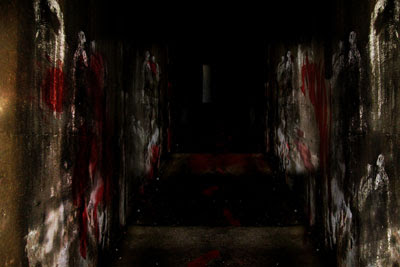 It's pretty gross. They told me that Gaara did this as he was walking towards the match at hand. He just killed two guys from the land of grass without lifting a finger. (Reports from ANBU confirms that they were gamblers and grifters who rig matches, so i don't feel too bad. But still its pretty grusome). Now I am really worried. It also seems something is going down in the Stadium as well, there are a few ANBU grouped here, I need to go see what this is... Anyways, now that Kakashi is back, I am sure he'll keep everyone up to speed. (At least he knows how to use his PDA/Camera).

Bye for now!
Konoha_cop
Posted by Konoha_Cop at 1:45 PM 8 comments:

Third Round Round Up!

I am at the stadium and in the stands reporting the situation as things happen! (I've been a little slow, still trying to figure how these stupid new PDA/Camera things work).

The 3rd round has begun! And we started out with a terrific battle! Uzumaki Naruto vs Hyuuga Neji!
Naruto won in an amazing upset over Neji. No matter how many hits Neji landed Naruto just kept on fighting. He showed some amazing strength, stamina, and smarts! The only picture I got from this match was this amazing technique Naruto mastered! (He kindly did it for me again after the match)! To think a genin can pull this off! 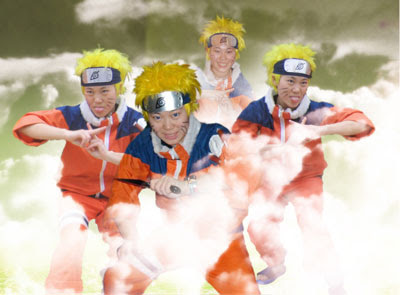 The next match was suppose to be Gaara from the Sand village vs. Uchiha Sasuke, but Kakashi and Sasuke are still no where to be found. And for some reason the Hokage decided to delay the match till the end. So the following match became Kankuro from the Sand village vs. Aburame Shino, but in a surprising turn of events Kankuro forfeited the match. So Shino won by default. Right after that it was Nara Shikamaru vs Temari also from Sand. Now this was an interesting match. A battle of strategists it seemed. Even though Shikamaru lost by giving up in the end (I have no idea why, he WON)!, he showed some very mature skills for a shinobi his age. He is someone to keep an eye on, he may oneday make a good feild leader.

So that's it for now, everyone is waiting to see if Sasuke shows up. As I look around here everyone is getting restless.
More as it happens! (and I promise I'll figure this PDA/Camera soon, so I can take more pics)!!

I just want to apologize for delays on our end, it seems that someone's been tampering with our systems here at the Hokage's office. A few nights back we found a small set of explosion notes hidden in the office. It took a while to make sure any and all traps were removed. Thankfully everything is now back up running smoothly.
So thank you all, for your patience!

It seems like Kakashi has gone missing again. Pakkun told me that he's off training Sasuke. The thing is the third round of the Chuunin exams are about to begin and no one has heard from them! Some folks are a bit concerned. Personally, I just think Kakashi is just going to be late again. I just hope not too late, or Sasuke will risk being disqualified from the match.

Things are really hopping in Konaha right now. Orochimaru resurfacing, and the Chuunin exams, all the delegates from other countries including the Kazekage from the Sand Village all in Konoha. Security and ANBU troops are stretched thin. Everybody is working hard to keep Konoha running smoothly. But too many strange events have been going on. I have to agree with Kakashi-san in an earlier post that something big is gonna happen. If anybody and anybody sees anything suspicious report it directly to our Jounins and ANBU squads. (I have also included a pic just in case you don't know what our ANBUs look like). 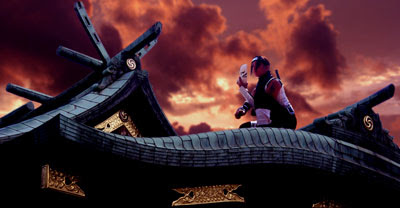 If your lucky you'll be able to aproach one of them. But if not please just go to our Jounins, and official security.