Greetings and Salutations!
Konoha_cop here once again to fill you in on what's happening! Kakashi is away for a few days on a mission. But he will be reporting back to us about it.
I have been assigned to cover the exams and report back the progress of all the new genins!
So now you'll get coverage on all fronts. From the Chuunin exams and what Kakashi is doing when he is not around!!
Let's Begin!
The 1st exam was yesterday. A "written" exam, to test out the whole groups information gathering and coping skills in stressful situations. Surprisingly a high percentage of students actually passed the exam. There are 78 students which means there are 26 teams left, according to proctor of the second exam Mitarashi Anko. In that group were all nine of the rookie genins!
Anko was surprised by the high turnout and comments that Ikibi may not have been hard enough on the students. And according to others present, Anko announced that she is planning to cut those numbers by more than half.

The second exam has been announced to take place starting today at training area number 44.
Also known as the Forest of Death. 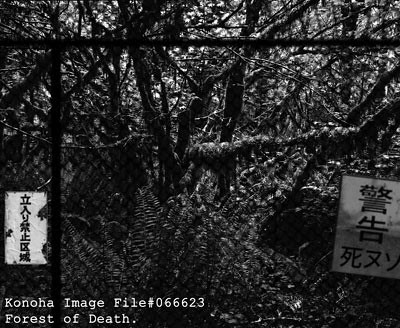 As you can see by this file photo it's not a fun place.
It's a 5-day survival exam. No holds barred. I am going got head over to the gates of area 44 now. I'll report back as soon as I have more info!

P.S. We should be getting a report from Kakashi and his solo mission next entry!
Posted by Konoha_Cop at 12:27 PM 7 comments:

Relaxing in the teachers lounge, Kurenai and Asuma came in and we started to chat a bit about the exams. Asuma tells me that Morino Ibiki is the examiner for the first test... Both Asuma and I thought that this could get ugly. Kurunai, only just becoming a Jounin teacher has no idea what we're talking about. Who is this guy, she asks. He's a pro. 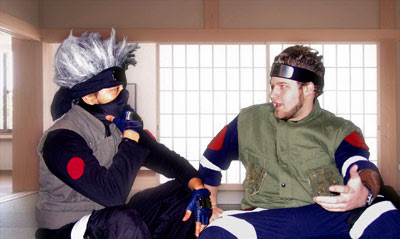 We both then explain to Kurunai that Ibiki is a professional torturer and master interrogator. There won’t be any physical torturing at the exam but there will be mental torture. He can through just being in a room with him, create a situation that can make even the most stable mind crack. Why? Because Ibiki is the ANBU’s torture and interrogation squad leader.
Wow, I would hate to be on the receiving end of what he has in store for them. But then again what doesn't kill them will make them stronger! I am kind of curious to see how each of Team 7 will hold. Sakura may break first, but Naruto may plain out just be trouble... As for Sasuke, he may fair quite well. Well, I just got a note that I have a new short solo mission to go on so that's it for now.
Jya'ne
Posted by Kakashi at 11:27 AM 5 comments:

Yosh~! Now that I have a bit of free time, thought it would be nice for me to talk about someone other then my wonderful team of Naruto, Sakura, and Sasuke. As you all may know I have other ninja comrades as well that i feel also deserve to be given a bit of praise. That's right, I'm talking about my cute little Nin-Dogs! Those little pooches have gotten me out of plenty of jams, so i would like to give credit to them. All 8 of them having been bread from the best of Nin-Dogs of Konoha! With the enhanced abilities that come naturally to dogs such as sense of smell and hunting abilities, they each have unique skills of their own. One dog particular stands out tho...(This one hates staying in the kennel...)
His name is Pakkun, who is an expert tracker, his nose never lies and for such a little guy, amazingly fast. He does have a bit of an attitude sometimes, I just think he has because he likes to have his way and that's not always the case, and yeah he talks way too much sometimes... I mean he will really chew you ear off. He loves to talk about all the things he's smelled and about how his paw pads are soft and whatnot. It gets a bit odd sometimes... PUNNI PUNNI??? *sigh* 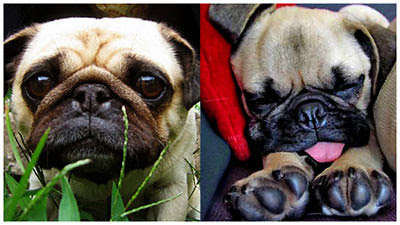 As for the rest of the pack, they usually just show up after I summon them with my "Doton Tsuiga no Jutsu". We usually hang out on days off, but recently been swamped with missions, Naruto can be a hand full. I'll definitely put them up next time~ ^.^v

Well back to reading jya'ne!
Posted by Kakashi at 10:49 AM 3 comments:

Sorry for the delay!

Greetings all!
Konoha_cop here. Sorry for the delay in posting Kakashi and I got sent out on a priority mission. We'll be back in a couple of days! When we get back we'll have some fun stuff from our mission.
thanks!
Konoha_cop
Posted by Konoha_Cop at 9:09 AM 5 comments:

Sorry I'm late I ran into a black cat...Um.
Well, I just got back from meeting with my team in front of the entrance to the "Chuunin Exams". All three came freely of their own will, as expected. I was glad, this meant now they can officially register for the exam. When I said this to the three, they were a bit confused.
So I explained that the exam can only be taken in teams of three. I lied to them before because I wanted them to decide individually whether or not they wished to take the exam.
The reasoning was I didn't want any one person pressuring the other to take the exam if that person didn't feel ready. One example being, if Sakura didn’t want to take the exam, Naruto and Sasuke would force her to take it. Or Sakura would take the exam out of guilt for Sasuke and Naruto. I'm proud of my team, they all chose to take the exam on their own free will, so saying that... I let the three enter, wishing them luck along the way. After they entered the exam room and the doors closed behind me, I took a moment to think back on the last few months. It has been a real growing experience for all of us. I hope that they do well in the exams and that they don't get to freaked out by the competition. Just as was I was thinking that. I heard Naruto being his noisy self on the other side of the doors. That made me laugh, I guess I worry to much. Wow, am I getting like Ikura? They'll be fine. Then right there I spotted Konohomaru and his little group yet again... what the heck they were doing? I gave them a good spook and they ran off leaving a camera behind? hmmmm....
Found this pic among many others. 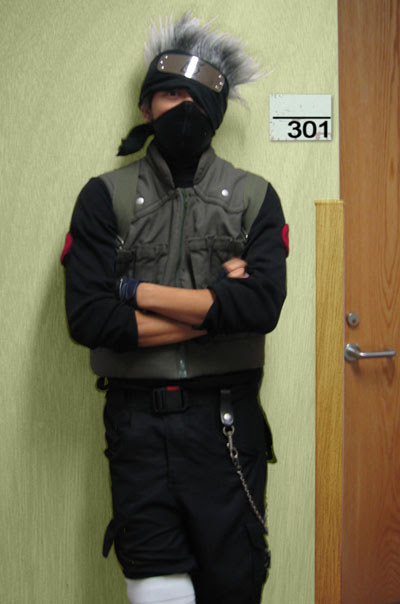 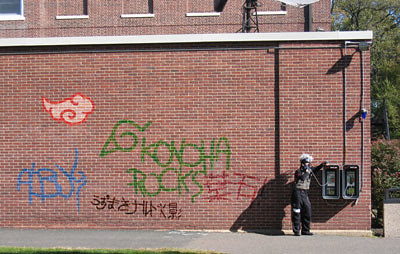 Morning everyone! It has been a relatively quiet few days. It's nice to have some down time. I went to the clinic yesterday to check up on my wounds. I am pretty much completely healed and some of my stitches were taken out. Then I spent some time with my cute nin dogs Pakkun, Tsume, and the others.
Took them out a good long walk out of down and gave them all a flea bath and cleaned out the kennels. Then in the evening I headed over to the "Pink Store" to see if the new Icha Icha came out yet. But alas, not till next week. I am just going to have to settle with rereading volume 2 again. Instead I picked up some take out ramen and walked back to my apartment for an early turn in. It's been a while since I have had such a quiet day like this. I almost felt guilty.
Well now I have to go turn in some paperwork and head over to meet up with my team to see who decided to take the Chunin exam. This time I don't want to be late! so Ja'ne!!
~Kakashi

P.S. Konohomaru has been following me around the last couple of days, what is with that? It's king of annoying, I bet Konoha_cop put him up to this...
I gotta have a talk with her...

P.P.S He he no picts this week, I'm relaxing~ but lots of fun stuff next weeK~
OH, and HAPPY CHINESE NEW YEARS it is the year of the DOG! (my favorite type of pets ha ha ha).
Posted by Kakashi at 2:27 PM 8 comments: