Yo Everyone!
Many of us Jounins are on high alert due to the investigation now going on in the Forest of Death. I am out in the outskirts of Konoha helping out some of the ANBU on patrol. So I don't have time for a really long post of what's going on. What I will do is leave you with what I think is a fun read. Especially for anyone who might be interested in the day to day tools and practices of a shinobi.

EXCERPT:
THE KONOHA NINJA GUIDE BOOK: CHAPTER 6
NINJA TOOLS AND THEIR MANY USES

It is very important for all Shinobi to be skilled in a variety of weapons.
Even more so to have a a working knowledge of all sort of weapons of any kind.

Kunai
Most commonly used tool used by all ninjas.
Kunai- This weapon is most often used as a projectile, much like the Shuriken. This weapon looks like a small dagger with a round handle, usually wrapped in cloth for grip, and has a ring at the end so that it can be picked up and thrown by just using one finger. This weapon can also be used as a knife in hand-to-hand combat. 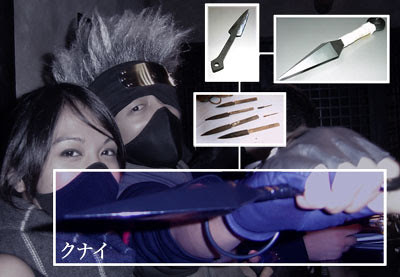 Shuriken
Very small, light throwing stars that contain five points, most often used in conjunction to kunais. These are not normally used to cause heavy damage to the opponent, as the size and weight is not usually enough to kill. They are placed in a small container on the user's hip, just like the kunai, for easy and quick access. 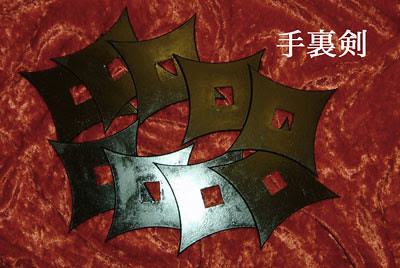 Exploding Notes
An exploding note is a piece of paper that has a spell casted on it that causes it to explode after a certain amount of time. They useful for setting traps by leaving them in places where they will be activated by an enemy. Or attached to projectile items to cause more damage. It can be attacked to just about everything from large object like a rock, a kunai, or even an animal.
NOTE: using exploding notes on animals is frowned upon in the fire village, and should be avoided when ever possible. 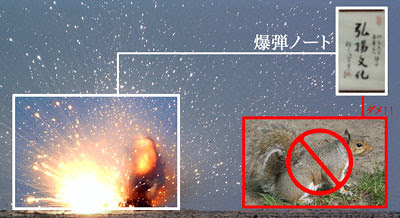 Scrolls:
Used for summoning. There are 2 kinds of summoning. One is for objects, such as for extra tools and supplies, and one for summoning living beings. The later requiring some sort of contract with what ever you are trying to summon. This is a very specialized skill. 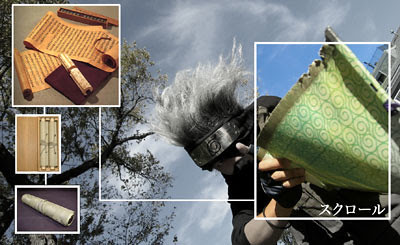 Katana
Again a basic weapon but in order to use one effectively it required years of discipline and training. Katana's are not used by many jounin and chunnin ninjas. Mostly because they are harder to conceal. they are usually relegated to special operations and ANBU squads.

As there tools are useful there will be times when these items may not be available to you in battle...
Remember a good ninja uses their surrounding to thier benefit in battle...
Anything can be used as a weapon!
No matter how big or small! Think between the lines and you shall never fall in battle...

With Konoha_cop out at Area 44 and the ANBU called into action something is up. After receiving these images from Sakura-chan's keitai, I had to get online and use this blog to get other Konoha nin ready and informed. It seems that Team 7 has encountered the false Grass-Nin and they were able to capture and subdue imposter!
Looks like it was Sasuke who took the nin down and pinned her to the tree, and from what I see, by looking at the hands and of this nin that she is not a Grass-Nin or a she at all. See for yourself. 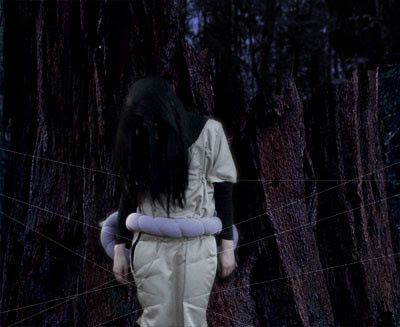 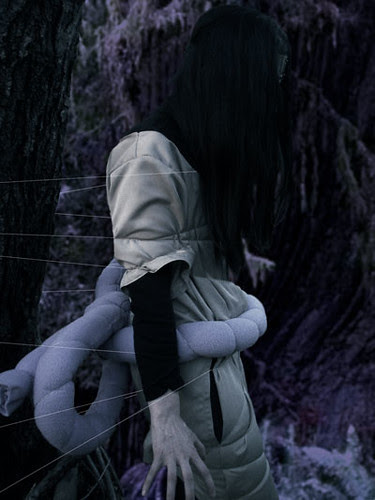 Still quite unsure until I received the third image of this Grass-Nin with half his face burned off and it seems that under the dead nin's face was the eye of a snake...
This is really a problem now. From what I remember, this may be none other then one of Konoha's legendary three... now renegade and been reported as missing for some time now. 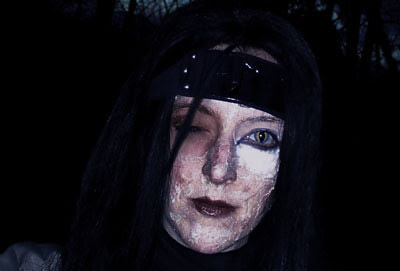 His name is OROCHIMARU!
He's a very dangerous and notorious ninja. There is not to much unclassified information I can give out at this time, but listed below is what I can relay. One word of caution. If you are a civilian and you see this person do NOT approach! RUN! Or risk death! 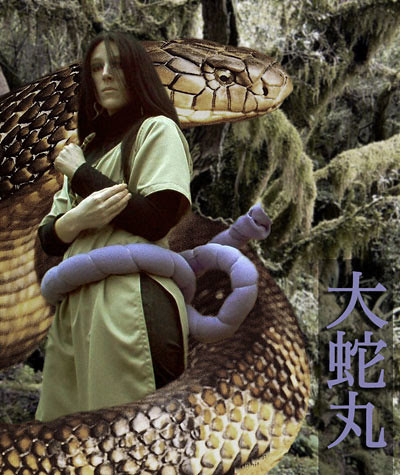 So all Konoha Shinobi be on the look out and keep an eye out for unknowns, and report them immediately, I'll be headed towards the main building to check things out. I cannot stress this more, do not try to take him alone. This is one strong opponent...
Damn and I was hoping to catch up on all my book subscriptions...

Konoha_cop here with some breaking news...
Earlier I was at the tower in training area 44 (The Forest of Death) waiting for Anko when I was informed of some disturbing news. Two of the exam proctors discovered three dead genin, outside of the Exam area, from the Hidden Village of Grass. Upon futher inspection the bodies that were found had their faces taken away. 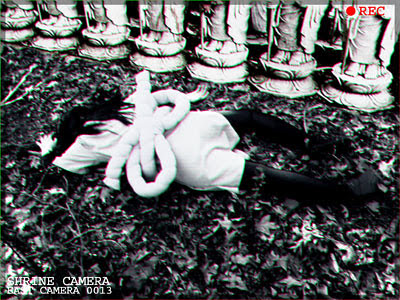 There is a very good chance that someone in the forest is impersonating these genin. As for what purpose, I am unsure. I have been told that Anko has gone into the forest to find the imposter. Before she had left she ordered ninjas to inform the Hokage and made request for two ANBU squads be sent into the Forest of Death as back up.

I guess that Grass ninja mentioned before isn't who she claimed to be... 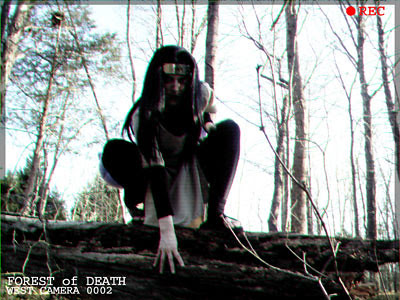 It also seems to me as if Anko has some idea on who the impostor is... otherwise why would she ask for the ANBU to back her up?

At the tower, some of the other Jounin and I tried to see if we could spot the impostor thru the security system but it seems that many of the genins have found the cameras we had stationed and took some out in response. That leaves us with blind spots in the exam area. So far we have no idea where the imposter(s) are at this moment.

This is getting troublesome. We can only speculate on what is unfolding. I have a hunch on who might be the intruder, as far fetched as it might sound...it could be . . . sigh I don't want to say it until I'm sure, I just pray that it isn't who I think it is.

Greetings!
Now that we have sorted out the whole Kakashi business I think it's about time we head back to our report on the chuunin exam. As I mentioned before the exam is a 5-day no-holds-barred survival competition. 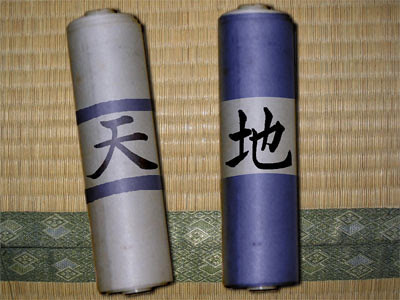 Example of the scrolls.
The objective is to fight other teams for their scrolls and bring it to the tower before the allotted time is up (120 hours).

There are two ways that a team can fail:
i. Any team that does not bring both scrolls to the tower intact will fail.
ii. Any team that loses a teammate or produces an unrecoverable teammate will fail.
Also, under no conditions is anyone allowed to open either scroll.

After all this was said and done, the teams lined up at their designated entry points. Anko’s last bit of advice to the students was "don’t die", and then the gates were opened.

It is clear that this exam is set up so that only 1/2 of the teams that are participating will be able to pass. This number can be easily decreased due to the fact that some scrolls will be lost in combat and in the fact that there isn’t obvious way of finding out which team has what scroll, therefore, even if students defeat another team and obtain another scroll, if it is not the scroll they need they will still fail.

Anko and her team of proctors have been keeping a close eye on things that have been going on inside the forest via closed circuit hidden cameras. There seems to me a lot of interesting contenders this year. Five minutes into the exam it was already reported that 3 teams were eliminated. The security team has been particularly interested in one particular ninja from the hidden grass village who has been acting quite odd. 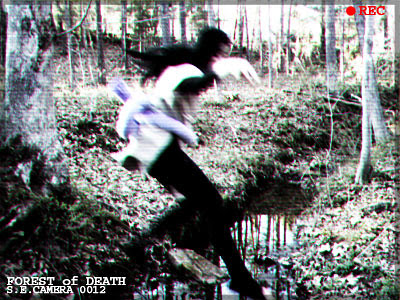 Another interesting team is the team from the Sand village. They are the dark horse in the exam, their village has been going thru some interesting power struggles as of late. This is definitely a group to keep an eye on.
Well that's it for now. I'll be back real soon with a report from inside the tower of the forest of death.
Posted by Konoha_Cop at 7:05 AM 12 comments: 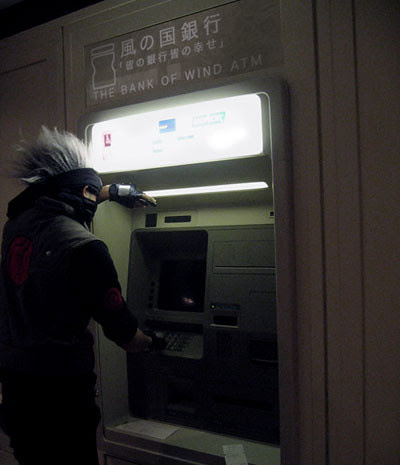 Well Konoha_Cop here and the mystery has been solved and I got the goodies HAHAHA! After tracking his last transaction using his MasterCard Sharingan on the Sand's Wind Country ATM (Thanks to the evidence from the ad!) Kakashi purchased a train ticket to Hokkaido departing from the Sand Country, Apparently Kakashi wasn't on a relations missions, he went to Hokkaido to learn how to drive HAHAHAHA (I'm a genius!!) Apparently Sandaime-sama had suggested Kakashi try out for a license (probably in hopes of reaching missions sooner and finishing faster, since we are short on shinobi here...) So in secret Kakashi went and... FAILED! Wow this is one for the office, he's gonna kill me I know... But here's the initial file sent back from the remote Konoha driving center. 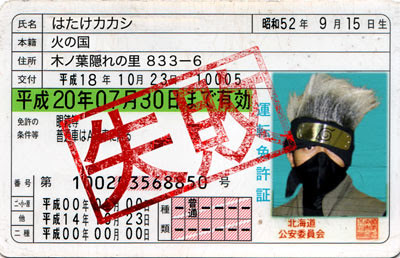 OMG the great Kakashi failed a test, it seems the Sharingan can't copy the art of driving. I also received some great pics of Kakashi during the test and boy does he looked freaked, he even stopped to ask the instructor if it was a big deal or not. Here are those pics... 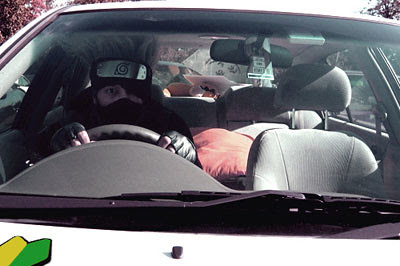 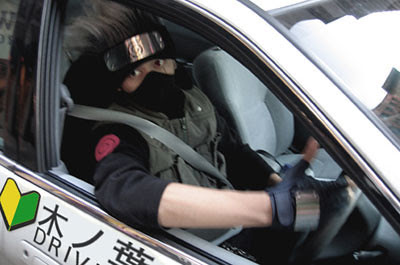 Man this is great, well at least it doesn't matter too much if he passed or not but what I do know it probably was a kick in the gut for him. Well at least we know how to cheer him up (ICHA ICHA PARADISE BOOKS)! Three volumes are waiting for him, when he gets back. Only sad thing is Naruto-kun has been so exited to get a ride that he fell asleep in one of the cars here! (Hoping to be the first to get a ride from his Kakashi-Sensei)... 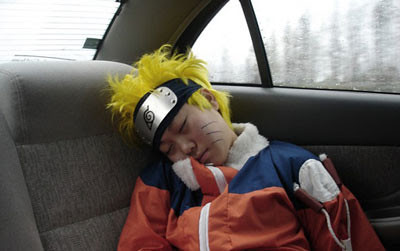 Well in anycase Kakashi will be back by next week and take over this Journal again (thank god! I need a vacation).
Till next time Konoha_Cop
Posted by Konoha_Cop at 2:33 PM 17 comments: